Our recent brief history of Zumbach's Motor Service* alluded to a neighbor that arrived midway through the famous shop's residency in Manhattan, that being Luigi Chinetti's Ferrari showroom and service garage.  It arrived in the early 50s, after Zumbach's had gained national fame for its work on automotive exotica like Bugattis, Alfa Romeos and Duesenbergs.  Perhaps Chinetti thought Zumbach's might offer a deep pool of master mechanics who might be enticed to move next door as his fledgling business expanded; more likely, he knew that the kind of people who drove Bugattis and Lagondas might be interested in Ferraris, and could afford them... 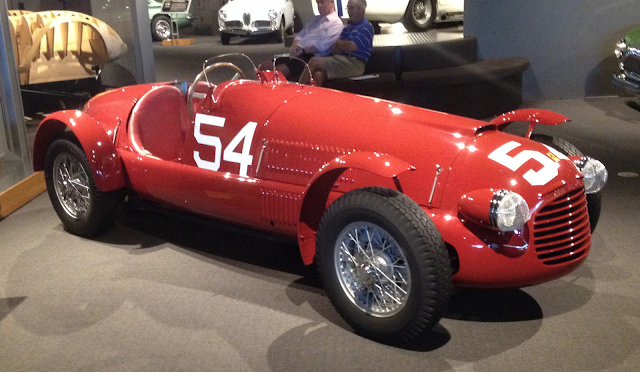 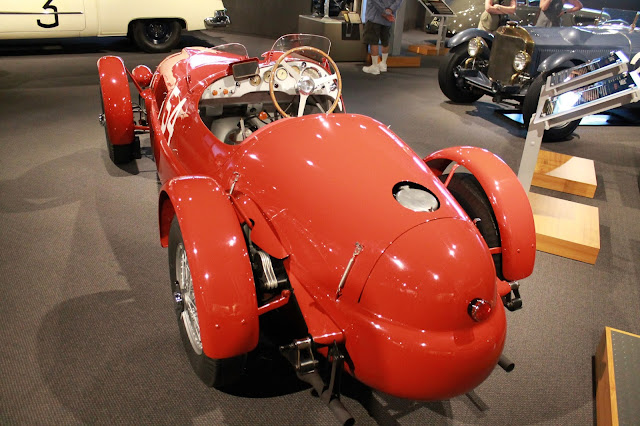 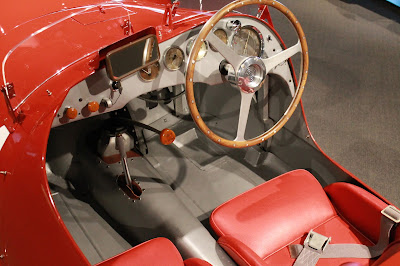 That was certainly true of Briggs Cunningham*, who bought the very first Ferrari sold in the United States from Luigi Chinetti in 1949. This Tipo 166* Spyder Corsa pictured above, built the year after Ferrari's 1947 production start, features cycle fenders which could be removed for open-wheel races.  Before selling this car to Cunningham, Chinetti won the Spa 12 Hours race in September 1948 with it. 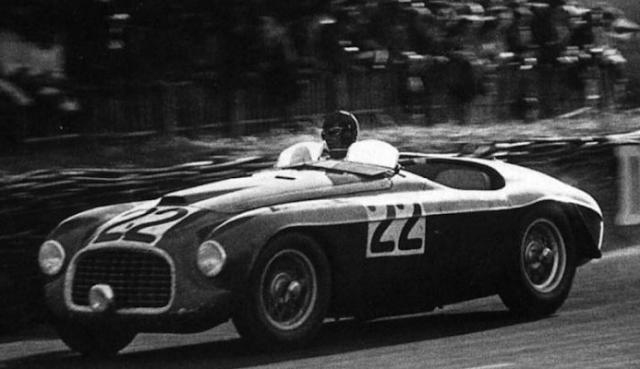 Cunningham's spider has a style which preceded the famous 166 Superleggera Touring barchetta (little boat), with which Luigi Chinetti had won the 24 Hours of Le Mans in 1949, his third overall win there, having covered most of the miles (and over 22 hours) himself. In the photo above, he's shown at this race, where he beat several cars with engines much larger than the 2 liter V12 in his little red "boat". 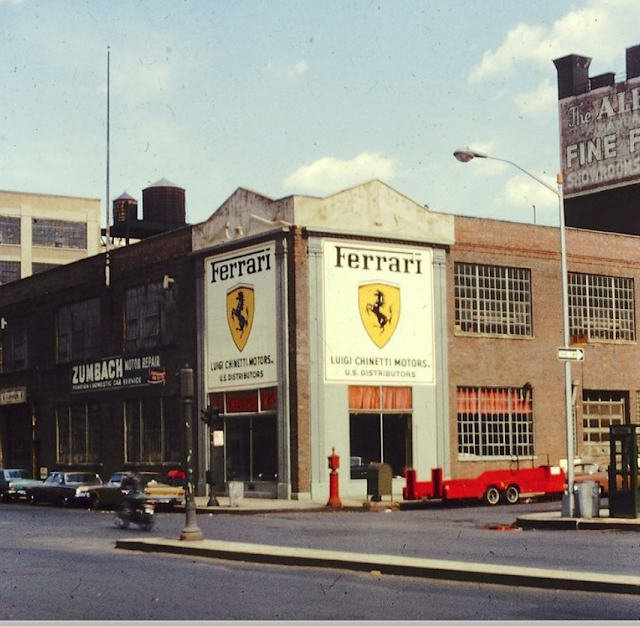 The Cunningham sale preceded the establishment of the Chinetti showroom.  By the time the showroom was up and running at 780 Eleventh Avenue in Manhattan, Chinetti was able to mount an impressive display of cars at the New York Auto Show.  His display for the 1954 World of Motor Sports in New York is shown below.  Left to right, the cars under the Ferrari banner Chinetti shared with O.S.C.A. dealer Alfred Momo include a Vignale-bodied coupe (likely a 225S), a 375 competition spider by Pinin Farina, a 250 Europa by Vignale, a Squalo (shark) single-seat racer which ran in F2 races for 1953 and would be eligible in F1 for 1954, and a dark colored OSCA* with white hood and trunk lids.  The car right of the OSCA looks like a Stanguellini, perhaps a part of Alfred Momo's Maserati and etceterini display. Maseratis and Siata V8s* can be glimpsed in the distance... 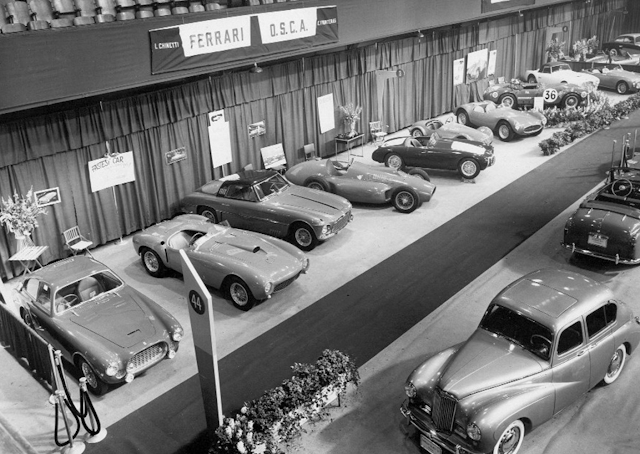 By the late 1950s, the modestly-sized showroom space at 780 Eleventh Avenue was well-furnished (one hesitates to say "littered") with road-going and racing Ferraris, new and used. In the photo below, we can detect a Pinin Farina coupe (looking very much like a 410 Superamerica Series 2 from 1957) to the left of a Pinin Farina 250GT cabriolet in back, while the foreground harbors a 250GT California spider and a barely visible single-seater. Photographer Mark Jaffe took this shot in 1962, and it's one of the rare views inside Chinetti's showroom, as the maestro disliked having his customers photographed. The wistful, nostalgic racing red glow is perhaps due to the photographer's reflection on the five figures Chinetti would've asked him for any of these cars in '62, and the (minimum) seven figures any of them would fetch now… 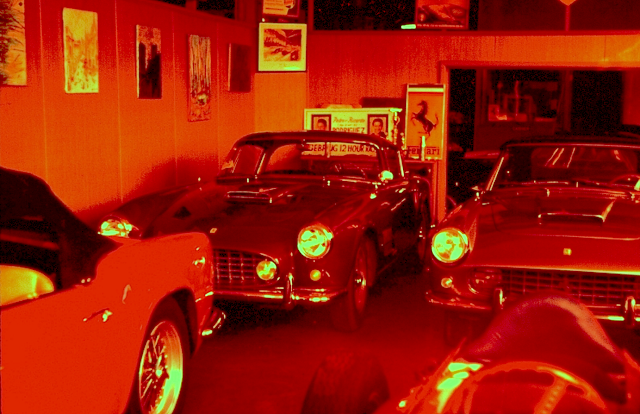 Two years later, early in 1964, a resourceful photographer snapped these Ferrari road racers being unloaded for a season's duty with Luigi Chinetti's North American Racing Team. Founded in 1958 to promote Ferrari sales through racing success, NART received the latest competition cars from the factory in Maranello. In what looks like a successful case of industrial espionage below, it seems like a hidden spy camera has recorded the delivery of a mid-engined 275P that will compete in that year's Sebring 12 Hours. 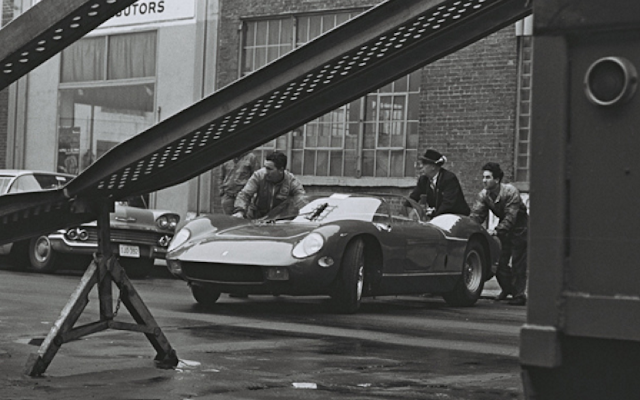 Another reason I wondered about industrial espionage is that these photos surfaced in the Henry Ford Museum (now simply called The Henry Ford) collection, and 1964 was the beginning of the legendary battles between the Ferraris and the just-developed Ford GT40.* In the photo below, however, the lucky pilot seems to be looking right at the camera, so my suspicion of secret sleuthing by Ford was dismissed. Ford might indeed have done some advance sleuthing, just not on this Manhattan street... 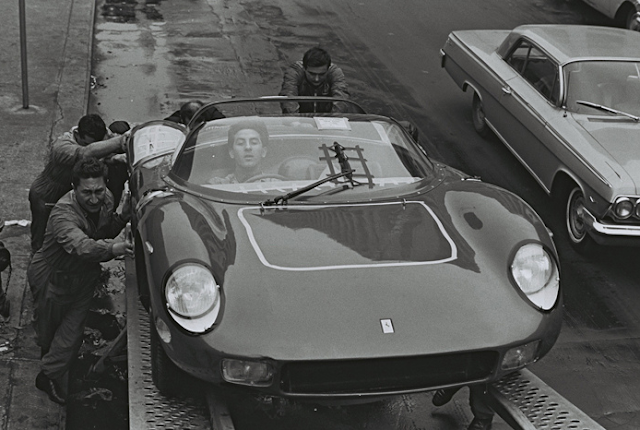 The cars look appealingly fresh, displaying taped lids and their Italian "on test" plates. And there was a front-engined Ferrari delivered that day too; the GTO64 below shows the fresh new body design featuring a steeply contoured windshield contrasting with the abrupt chop of the flat-windowed "tunnel roof" at the rear.  The car crouches behind the transporter framework like a caged beast.  Once released, this car (or one of its sisters) would win the Daytona 2000 Kilometers in February 1964, in the hands of Phil Hill and Pedro Rodriguez. And the 275P? In March, 275Ps would finish 1st and 2nd at the Sebring 12 Hours, with a similar 330P in third, followed by three Ford-powered Shelby AC Cobras.  Chinetti's (and Ferrari's) deep and wide racing experience, however, would hold off the mid-engined Ford juggernaut, especially at Le Mans, for a couple years longer.  Maybe Ford really did need somebody with a spy camera... 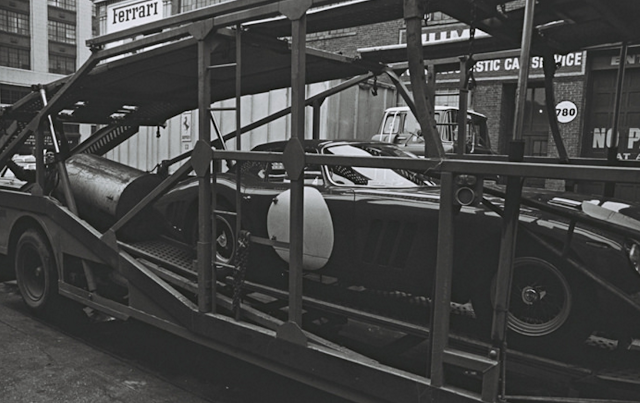 *Footnotes:  Zumbach's is described in this essay series in "Before Cars and Coffee There Was Zumbach's" from 4/11/18. Ferrari model numbers in this period reflected the displacement of individual cylinders. Thus a 12 cylinder 166 was a 2 liter car.  But as Ferrari soon branched out into building inline 4 and 6 cylinders, you had to know that a 750 Monza was a 4 cylinder car to realize it was a 3 liter, just like the 250GT V12.  A brief history of Briggs Cunningham's namesake cars is featured in "A Moment Too Soon" from 4/15/17.  His later success with the Jaguar E-Type is reviewed in "Racing Improves the Breed" in the archives from 8/13/17.  The OSCA saga is featured in "Etceterini Files Part 7: Almost Famous" from 4/20/16;  there are notes on the Siata 208S and related Fiat 8V in "Etceterini Files Part 10" from 11/13/16.  Finally, the design and history of Ford's GT40 are surveyed in "Roadside Attraction---Shelby American Collection Part 2" from 12/31/17.